Why you should never take a suitcase to Egypt

Two friends and I took off to Egypt back in 2010 for a quick 10-day trip, and all three of us managed to pack light enough to go carry-on only.  Lynette and Steve had standard carry-on suitcases, and I had a backpack the size of a carry-on suitcase.

I chose to take a backpack solely because I simply prefer the ease of carrying it hands-free when roaming from place to place in a foreign country.  But I realized it had other advantages as soon as we stepped foot outside the Cairo airport. 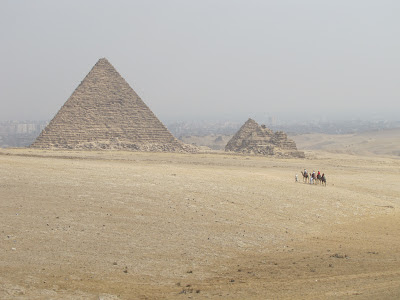 We were visiting friends that live in Cairo, and they had sent a driver to pick us up. As the driver pulled up to the curb, a hawker appeared out of thin air, grabbed both Lynette’s and Steve’s suitcases in a flash, and had them tucked inside the van with his hand out to demand baksheesh before any of us could blink.  I mean, the driver had barely stepped foot outside the van before the “helper” had accomplished all this.

But with my backpack securely on my shoulders and fastened and clipped in all manner of places around my middle, this guy wasn’t going to get my backpack into the van unless he picked me up with it.  And considering I probably outweighed this man by a good 20-30 pounds, he surely knew he wasn’t going to be able to pull a fast one on me (and my luggage).

After a few days in Cairo catching up with our friends, the three of us took a flight to Aswan in the southern part of the country.  We checked in at the domestic terminal in Cairo, again, all of us going carry-on only.  But as we started walking away from the ticketing desk, the airline agent suddenly called us back.  He had decided that Steve and Lynette had to check their suitcases.  Despite protests and serious flaws in his logic as to why they had to all of a sudden be checked, Lynette and Steve had no choice but to check their bags.

The agent never even so much as glanced at the pack on my back.

Thankfully, the suitcases were on the luggage belt when we arrived in Aswan.  But so were Lynette’s toiletries... and car keys... and other random items that had fallen out because someone had opened her suitcase and didn’t properly close it.  Nothing was missing - much to her relief, of course - but that was simply yet another reason that I was glad to have a backpack instead of a roller bag.

And outside the Aswan airport, yet another hawker hustled over to place the suitcases in the trunk of our taxi.  And once again, my backpack stayed securely strapped to my body.