I will be boarding a plane for Delhi in exactly 38 hours.  That's right, the countdown has progressed from days down to hours!  I'll be spending a month on a wild goose chase around Asia (though I have no idea what I'm chasing), which means I will need to pay careful attention to what I pack.  The whole packing process would be fairly easy if I were willing to bring a ton of luggage.  I could throw in anything and everything I might possibly need!  Way to go, right?  No effing way.  I hate carrying stuff, keeping up with stuff, and most of all - I hate checking luggage because I have firsthand knowledge of how checked luggage gets treated.  I'll keep all my things with me, thank you very much.  That is why I'm putting forth the effort to pack everything I will need for 32 days in this: 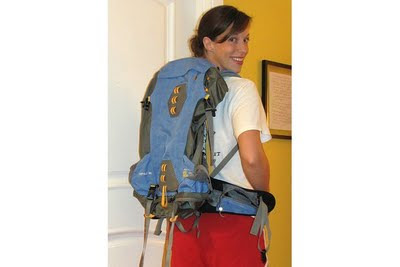 Yep, I will be living out of a carry-on-sized backpack for a month. Since I don't need to dress (or specifically, dress up) for anything in particular, it makes choosing clothing much simpler.  I also won't need bulky clothes for cold weather.  So what am I taking?  Here is my list:

1.  2 short sleeved shirts
2.  One tunic
3.  2 pairs of long pants
4.  One skirt
5.  Waterproof rain jacket (it's monsoon season, y'all!)
6.  Fleece pullover (mainly for planes and airports, which blast AC like they're trying to freeze hell over)
7.  One pair of water sandals (Teva Westwater - they are awesome, awesome, awesome.  And cute.)
8.  One pair of super old running shoes that I will probably chuck along the way
9.  One pair of super old ballet flats that I will probably also toss somewhere along the way
10.  DRUGS.  No, not crack.  I'm talking Cipro, Pepto, Excedrin, and Benadryl for when different parts of my body decide to rebel against my current location.  Oh, and Malarone.  Because it's all fun and games until you catch malaria, and then it's just fun.
11.  Wine and pantyliners for our hosts in India.  That's right, wine and pantyliners.
12.  My Embrace Sleep Collar.  This thing beats the pants off of every neck pillow I've ever used.
13.  Enough Lonely Planet guidebooks to suffocate a small animal
14.  An extra backpack that folds down to freakin' nothing.
15.  Toilet paper.  We live in relative luxury and always have it provided for us here in the good ol' western world.  Not so much in other places, like, well, everywhere I'm going.
16.  Laundry detergent.  Lots and lots of laundry detergent...
17.  A sarong.  The single most versatile thing you could ever pack.  It's a blanket!  It's a skirt!  It's a dress!  It's a towel!  Take that, Shamwow.

So other than the obvious basics like toiletries, a camera, and a swimsuit, that's all, folks.  And it's all going in that blue bag - except for the wine, which I will actually check in a small bag and pray to the airline gods that it makes it to the other side of the world.  Now all I have to do is throw everything in the bag and go!
Posted by Carla at 1:01 AM