One upon a time, there was an egotistical, bat-sh*t crazy dictator named Nicolae Ceausescu in the lovely country of Romania.  Ok, he was actually elected to the position of Secretary General in the communist-controlled country and later became head of state, but that’s beside the point.

In the 1980s, Ceausescu decided to direct a big ol’ “nanny-nanny-boo-boo” at the rest of the world, and he started construction on the monstrous Palace of Parliament, also known as the People’s Palace, to basically house the Romanian government in the capital city of Bucharest.  He wasn’t one to go for an ordinary building.  Nope, he had to one-up pretty much every other country in the world, and it didn’t matter if he nearly bankrupted his country and starved his people in the process of showing off. 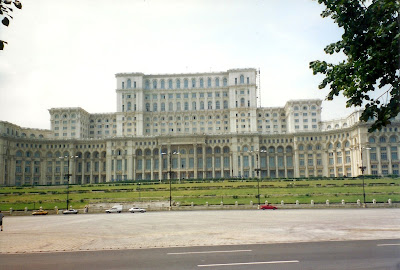 I had the chance to take a tour of the palace a few years back, and it is indeed mind-boggling.  Here are a few fun things to know about this mammoth of a structure:

By the time the palace was nearing completion in 1989, the people decided they’d had just about enough of this crap, and they promptly overthrew Ceausescu.  They were forced to give up things like food, water, and heat in order to gain “their” palace.  And that’s a pretty bum deal.

The building of the palace basically ran the entire country into the gutter, but there is no denying that the palace really is an amazing sight to behold.  This is totally the do-not-miss sight in Bucharest.  Of course, if you go, you’ll only get to wander around about 5% of the building, but given the size of it, you’ll be seeing plenty.  You’ll also get to stand on the same balcony that Michael Jackson did.  Just please remember to say hello to the correct city.
Posted by Carla at 8:30 AM