I didn't know that The North Face brand was manufactured in Vietnam until I began this month-long Asian adventure.  I also didn't know until I met up with friends in Bangkok that had just been in Vietnam that North Face gear can be purchased very cheaply in Vietnam.  So while in Sapa, I bought both a backpack and a Gore-Tex rain coat complete with a zip-in fleece for next to nothing.  However, I heard conflicting reports on the gear from various sources throughout the trip.  These are the three things that I was told:

Hmmm.   Did I buy something real (albeit possibly imperfect) or did I just pad some Chinese pockets and end up with something that will fall apart and/or leave me soaking wet in my moment of need?  I gave the once-over to the backpack first.  All the zippers worked, the straps worked, and the stitching, fabric, and straps seemed sturdy enough.  The only flaw I found was with the rain cover, which didn't seem to fit over the backpack very well.  Well, shoot, if that's the only defect I can find, then I can live with that.  I paid $9 for that pack.

I picked over the jacket next.  Zippers work ok?  Yep.  Snaps actually close?  Sure do.  Seams strong enough?  They survived a frantic flailing-fest around the room, which seemed like a legitimate test to me.   But was it waterproof?  I didn't have it with me during any of the monsoon rains we got caught in throughout the trip, and there is no such thing as monsoon season in the US (I'm not going to wait for a chance hurricane to come through for me to not only test the jacket, but test my ability to not get blown down the street).  So I came up with an alternative - the shower. 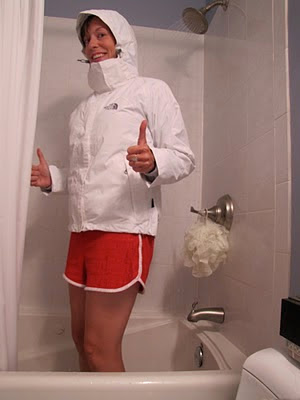 Yes, I donned the jacket and jumped in the shower.  What, do you have a better idea?

Well, throw me down and call me Sally.  It's waterproof!  Maybe it really is made of Gore-Tex, after all. So after my Super Much Thorough and Scientifically Proven test, I have concluded that the truth is....  #2.  Real but defective.  I can easily live with that.  Now - who wants to go camping?

Update:  check out what happened to my North Face backpack here.
Posted by Carla at 9:34 AM