Tipping is a custom that tends to be present in most cultures in one form or another.  Bribery, while I would rather not call it a custom, is also widely utilized in many cultures.  I would say that there is a fine line between the two, but having been to Egypt, I no longer believe that there is a line that firmly separates the two. Egypt has managed to blend tipping and bribery together in an overwhelmingly fuzzy and sometimes annoying custom and concept called baksheesh.

In the US, we tip for certain services such as being waited on in a restaurant, delivery of pizza or room service, or a bearable taxi ride.  Tips in such instances are expected, but they are usually never demanded.  Not so in Egypt.  The Egyptian expecting baksheesh from you will have absolutely no qualms about telling you to pay up, or pay up more if your offering is deemed insufficient.

Baksheesh is sometimes forced upon the unsuspecting.  If you let your eyes wander from your bag outside the airport for a split second, some enterprising Egyptian will whisk them away toward either the terminal or your ride, and he will demand payment for carrying them before you even realize your bags are no longer by your feet.

Baksheesh is also your ticket to getting most anything you want (or just giving in to paying more for what you want).  I went to Egypt with three friends to visit two other friends that were living in Cairo.  Meg, the female half of the dynamic Cairo-dwelling duo, took the three of us to see the pyramids at Giza.  When we asked for both garden-variety entrance tickets as well as tickets to go inside the Great Pyramid, the man at the ticket counter told us that they were sold out of tickets to go into the Great Pyramid.  We three visitors were crushed.  It was 10am and they were already sold out for the day?  Meg was furious.  "This is bullsh#t."  She handed 20 pounds and her diplomatic ID to the guide she'd hired for us.  "Give him these and tell him to give us 3 tickets to get inside the pyramid."  Our guide did as instructed.  The man at the booth looked at Meg's ID.  His eyes bulged out of his head.  He sheepishly handed back both the ID and the money, apologized profusely, and handed us the tickets.  I'd only been in the country for 12 hours, but I learned an important lesson.  In Egypt, "no" never means "no".  It means throw money at the issue until it turns into a "yes".  Or have a diplomatic ID. 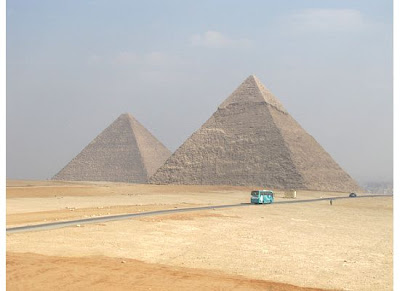 We encountered a similarly silly request for baksheesh later in our trip as we wrapped up an amazing sunrise hot air balloon ride over Luxor (which, by the way, is entirely worth the 4:30am wake-up call).  Not knowing anything at all about hot air balloons, we quickly learned that the operator has very little control over where the balloon lands.  We touched down in the backyard of a young couple with two children, who seemed to be as fascinated with this puff of hot air carrying a basket full of white people as the white people were with them.  As soon as we were on the ground, the father came around demanding payment from us all for landing in his field.  Interestingly, he didn't ask the balloon operators for payment - only the people toting cameras and backpacks.

There are other instances where baksheesh really does score you a deal, though.  Want to see something normally off limits to other tourists?  Offer baksheesh, my friend.  Think that guy at such-and-such tomb is just being annoying?  For a little change, he can probably tell you things about it that you would never find out about on your own.  We went into a tomb in the Valley of the Kings on our own and encountered a man inside that led us around and showed us things on the walls and on the tomb itself that we would have never seen or deciphered.  We were grateful for his knowledge.  Unfortunately for him and to my embarrassment, I was completely out of small change and had nothing at all to give him.  One of the times I actually wanted to give baksheesh, I had none to give.
Posted by Carla at 1:41 AM