Eating on the road can easily become a game of Fast Food Roulette.  Before you realize it, you've eaten at McDonald's, Taco Bell, Chick-fil-A, and Wendy's.  Three times each.  It's probably the only time in your life that your stomach will say to you, "Jesus, ANOTHER french fry?"

But being on the road also means finding a new and amazing place (that's probably not 0.2 miles from the interstate) or going back to an old favorite.  Like your typical GART, ours had a little bit of each.  There was amazing food.  There was mediocre food.  There was scary food.  Here are the winners of the Great GART Meal Awards of 2013:

Chris had talked about going for hibachi at the Japanese pavillion in Epcot for weeks.  He'd been before, and said it was the best hibachi he'd ever had.  I was sold.  Who doesn't like hibachi?

He was spot-on.  I had swordfish that was perfectly cooked, and whatever those sauces are that the chef threw on it blended beautifully into one big smiling rainbow in my mouth.  It also doesn't hurt to watch your chef make your food do gymnastics as he cooks it.  Dude had skills.

Teppan Edo goes for quality over quantity.  The last hibachi place I went to, while pretty tasty, served up bowls of fried rice the size of a human head.  No one needs to be served that much fried rice, much less eat it all, which is exactly what I did. But don't worry, you won't leave Teppan Edo hungry - at all.  You'll still be basking in with post-flavor-awesomeness glow.

Dadgum it, I really want that swordfish again.


The Bad:  Yum Yum Sushi in Mobile, Alabama
We had just arrived in town.  We were tired.  Chris wasn't feeling well.  Neither of us felt like preparing food ourselves, and it just so happened that a sushi joint was 2 miles down the road.

Except... said sushi joint was located inside a gas station.  Hey, road trips are supposed to be an adventure, right?  That's a great excuse to have sushi from a gas station! 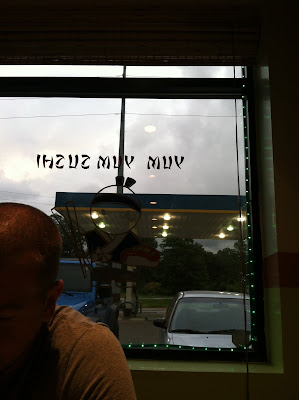 There is never an excuse to have sushi from a gas station. Not even being tired, lazy, and sick.  Just pick up the phone and order pizza.

Here is how our evening went:

Me:  "I'll have the salmon roll, the yellow tail roll, and the tuna roll.  And do you have jasmine tea?"

The sushi wasn't bad.  It wasn't good, either.  Also, Celine Dion was playing on the stereo.  We were eating raw fish in a gas station listening to horrible 90's music with a waiter that probably doesn't remember his own name.  I'm rather glad to say that we got out without dying from either the music or the food, as well as getting out without killing the waiter.  Everyone wins.  Sort of.


The Ugly:  Taco Bell in Richmond Hill, Georgia
There are only two things that a fast food restaurant has to do to satisfy a customer.  Give them food, and make it fast.  That's it.  The bar is set pretty low.  No one said the food had to be good.  Just throw something mildly edible in a bag and hand it over.

The employees at this particular Taco Bell do not understand this simple rule. Now, if 30 people come in all at once, then of course, no one is going to get food and get it fast.  But when we walked into this tragedy of a fast food joint, there were not 30 people waiting.  There were only 2 people in line to order and about 7 people standing around waiting for food.

All of the employees looked utterly dumbfounded, like they had no idea where they were, what they were doing, or remembered that they could, say, rub 2 brain cells together to form an actual thought. An irate manager stomped around yelling at all the blank-faced employees.  Everyone waiting for their food was glaring at everyone behind the counter.

A guy that walked in 15 minutes after we did got his food before ours came out.  The manager saw the fury starting to erupt on my face and assured me that our order was just about ready.

We waited 20 minutes for our &*$#ing tacos.  And as soon we left, I called Taco Bell customer service to complain about this abomination.  Bastards didn't even offer us coupons.  Up yours, Taco Bell.