The last time I stepped foot into Disney World was a whopping 24 years ago.  I am an old fart. And I've gotten set in my traveling ways.  My idea of a good travelin' time is either trying to make my way around a country without basics like clean water and electricity (or a functioning government), seeing and experiencing natural beauty, or seeing and experiencing manmade stuff that is really, really old.

I admit, I scoffed just a bit at going to Disney World.  Everything is man-made, pretty darn new, and, well, it's in Florida.  No offense to any of you that are from Florida or simply love it there, but you have to know that it is full of crazy people.  You know a state is crazy if they have their own tag on College Humor.

But to be honest, I actually has some unfinished business with ye olde Disney World.  See, when I was there 24 years ago with my parents, I really wanted to go on Space Mountain.  What kid doesn't? But my mom was a giant chicken, and my dad said he couldn't because of his eyesight (which was probably man-speak for "I'm also a giant chicken.").  So Space Mountain never happened.  So sad, right?

We hit up Magic Kingdom, Epcot, Animal Kingdom, and Typhoon Lagoon.  There have been plenty of changes in the past 24 years.  I rode rides that, like Space Mountain, I would have missed out on had they been there on my last visit.  My parents would have never gone for Splash Mountain, Expedition Everest, or the water slide that featured a 5-story drop.

After four days of fantastic rides, fun shows, crazy fireworks, and Mickey Mouse-shaped ice cream sandwiches (those things are addicting), I can only find 3 things wrong with Disney World:

1.  It's still in Florida.
2.  They don't serve beer in the Magic Kingdom
3.  The wait for Soaring was so long that we never got to ride.

Altogether, pretty amazing.  Although, it once again appears that I have some unfinished business with Disney.  I have to go back and ride Soaring.  I just hope it doesn't take 24 years for me to get back there again. 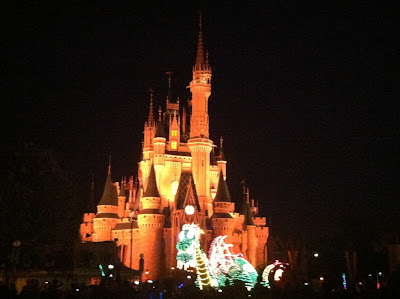