I arrived in Pucon, Chile last week with one main goal:  climb to the top of Volcan Villarrica.  At 9,340 feet, it is by far the highest point in the Pucon area.  Its snow covered peak looms over the town, and still offers the lovely threat of spewing lava, although it hasn´t blown its top since 1971.  And that was ages ago as far as volcanos are concerned.

Ok, not really.  Whatever.  I still wanted to climb it. But looking up at it from the comfort and safety of Pucon, it looked a little intimidating. 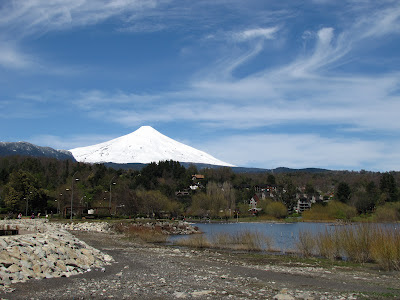 The only other volcano I´ve climbed is Volcan Pacaya in Guatemala, and I thought I was going to get killed in a bathroom before the hike even started.  Pacaya also erupted just a year later.  I didn´t think of this until after the fact, but my track record with volcanos isn´t that great.

I tried to book a trip up with Paredon Expeditions because I´d heard such amazing things about them.  But they didn´t have enough people booked for the day I wanted to go, so they checked around and got me in with a small group being led by Tour Volcan Villarrica.

I was tagging along with a group of four 20-something French girls.  I didn´t expect them to give a hoot about me, and sure enough, they didn´t even make an attempt to say hello when they arrived at the tour office at 6:45am.  They were also wearing jeans, cutesy sweatshirts, and scarves.  For real?  Mountaineering in that garb?  Stupid French girls.  I wondered if they would even make it to the top.

As the tour people began throwing equipment at us, I began to wonder if I would make it to the top, myself. Sliding pants, snow gaiters, crampons... and an ice axe?  What do I need an ice axe for?  Of course the girl that grew up in Alabama and didn´t see real snow until the ripe age of 17 wonders this.

We took a ski lift from the base of the mountain to cut off some of the time required to get to the top.  Even from the top of the ski lift, it was a 6-hour slog to the summit.  It looked steep.  Really steep.

We started to walk at a very slow pace.  I fell flat on my face twice in the first 20 minutes.  This was not a good sign.  Just before we started up a steep section, our guides showed us how to use our ice axe as both a hiking stick and a tool to arrest ourselves should we happen to start sliding uncontrollably down the mountain.  So that´s what it´s for.  Well, that sounds just ducky.  If I start falling, I´m more likely to stab the ice axe in my leg rather than the snow.

We stopped for a break every 30-60 minutes, which gave us a chance to chug water, rest, and take in the incredible views. It also served to show me exactly how steep the terrain really was. 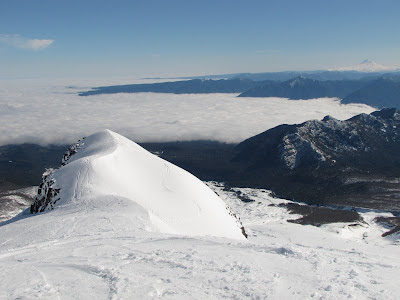 At one point, approximately 1.5 hours from the summit, the terrain was so incredibly steep that I got horribly uncomfortable with my footing.  The French girls were having no problems (which made me dislike them even more), so what was my problem?  How is it that I´ve come this far in life and haven´t learn how to put one foot in front of the other and keep it there?  My boots just didn´t want to grip the ice and snow where the lead guide and the French girls had already tread. The rear guide was having to give me instruction and encouragement. Well, great.  I´ve come this far, I´m going to fall down the mountain, stab myself with that damn ice axe, and die a horribly embarrasing death.  The volcano gods hate me. I consider hyperventilating.

A mere 60 seconds later, the lead guide gestures to us to sit and rest on a 6-foot long "ledge".

According to our guides, walking in crampons was even more dangerous than walking without them.  They even went over with us (again) how to arrest ourselves with ye olde ice axe should we succumb to gravity and start plummeting down the mountain.

Whatever.  I felt f-ing invincible with those suckers on.  They added about 5 lbs each to my feet, but I didn´t care.  I felt like I could do cartwheels wearing them.  Dear crampons, I love you.

We reached the summit at about 2pm.  It was insanely windy.  The volcano was spitting sulphur gas into the air.  The view was unbelievable.  I made it to the top without killing myself! 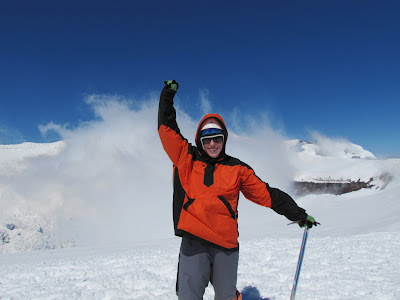 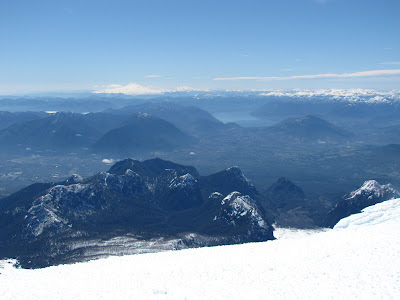 But then we had to get back down.  And for 15 minutes, I lagged behind the French chicks because I suck at going downhill.  The rear guide even held my hand at one point to help me move faster.  At the 15 minute mark, the lead guide sat us down again.

Oh!  Ok, that sounds much better than walking down without crampons.  And so we sled in small sections down the mountain until we were back at the ski lift.

The climb was beyond difficult.  My triceps were killing me the next day.  Parts of the bottom of my feet were numb.  I had blisters on my ankles.  My chest muscles were sore.  My right palm was swollen and tender from keeping a death grip on that ice axe.  Ironically, my legs were not the least bit stiff or sore.  I was scared out of my mind more than once.  But it was amazing, unbelievably beautiful, and absolutely worth it.