Happy belated Chilean Independence Day! I fully intended to write up a post about this holiday the day of, but you see, there were these earthquakes...

No, not real earthquakes. The earth's tectonic plates were not shoving each other around. However, a Chilean drink called a terremoto (Spanish for "earthquake"), made with cheap sweet white wine, pineapple ice cream, and some mystery liquor thrown in for good measure, did a fantastic job of shoving ME around.

Rachel took us to a bar in the center of Santiago called La Piojera after cruising the unusually dead streets outside. This is THE place in the city to have a terremoto. And from everything we had heard and read, having more than one wasn't a bright idea. Having more than two was a horrible idea.

La Piojera was hopping. A guy was playing the guitar while people clapped and sang. We ordered a round of terremotos. A drunk man stumbled over to us, welcomed us, told us a man in the bathroom liked his shoes, and then he complimented all of our shoes. He came back a few minutes later to tell us, "I am present. But I am not present! But YOU are present!" We called him Chilean Shakespeare.

Round #1 of terremotos. Done.

Round #2 arrived. Did I mention that these things aren't even that tasty? Just take a look at Rachel's reaction in the picture below.

We started making friends. We sang the Flintstones theme song to a Chilean English teacher with Bam Bam on her t-shirt. I sang a song for a guy in exchange for his sombrero. We toasted, "Salud! Terremoto!" with all the surrounding tables.

The next morning, I learned the following:

1. We had to interrupt our metro ride home to find a bathroom for Janie (who is incredibly intelligent and did not participate in Round #3).
2. I ate 1/4 pan of lasagna back at Rachel's.
3. I did a load of laundry.
4. I did indeed make it back with the sombrero.
5. I am never, EVER drinking one of those God-forsaken, liver-pickling concoctions again. 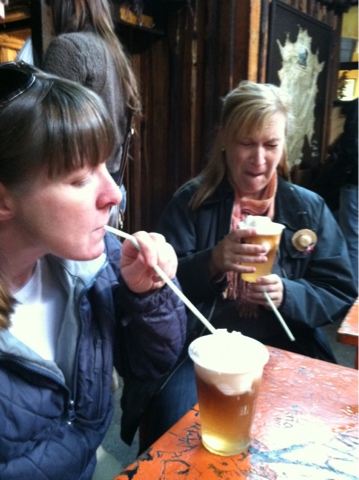 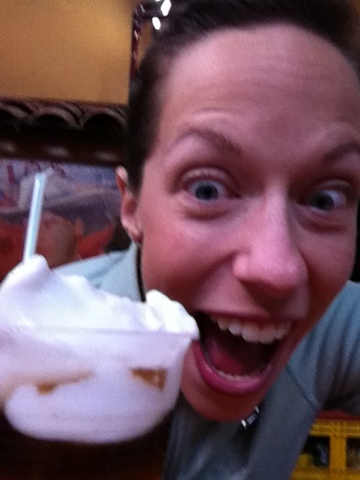