My lovely friend Rachel landed a month-long stint in Guatemala a couple of years ago, and I made plans to visit her immediately after she confirmed it.  Two weeks later, I found myself in her condo in Guatemala City.  We booked a 3-day adventure tour and promptly kicked it off with a hike up Volcan Pacaya - a volcano that has been slobbering lava slowly but consistently for 46 years. 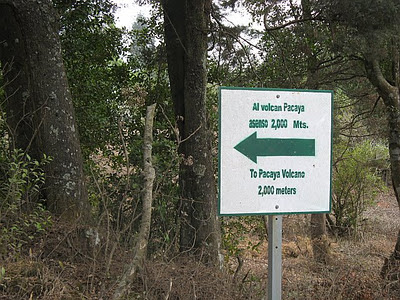 The van dropped us off at a town at the base of the volcano.  Children swarmed around the van before we could manage to unbuckle our seat belts.  The gringos had arrived.

I detoured to the nearby women's bathroom to escape the throng of screaming children shoving sticks in my face.  I came out of the toilet stall to see a girl all of about 5 years old holding a stick (of course) and staring at me.  I smiled at her and walked to the sink to wash my hands.

She was fuming.  She looked like a furious Voldemort, only cuter and with a nose.  She was standing between me and the door, and she was holding a weapon.  I was going to get beaten to death by a 5 year-old in a run-down, dirty bathroom on a volcano in Central America. What an embarrassing way to die.  And since I hadn't made an effort to find an ATM since landing in the country 24 hours earlier, I couldn't even buy my way out of death.

After standing there dumbfounded and scared out of my gourd for a few moments, I tried to edge around her to escape.  She didn't attempt to stop me or beat me within an inch of my life, but she was certainly giving me one hell of a stink eye.

Rachel and I (and Rachel's stick) made it to the lava stream at the top with no problems.  But I had to borrow Rachel's stick a couple of times on the way down to help me with my footing.  Dadgum it, I really did need stick. 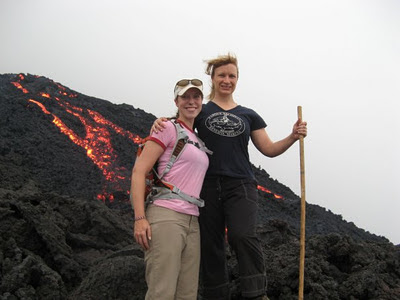