We were so utterly relieved that Babushka hadn't thrown us out that we went out to a market and bought her flowers.  We still felt a little bit guilty about springing an extra person on her.  The look on her face was priceless, and she started exclaiming in Russian.  "She loves them," Andre translated, though no translation was needed that time.

Later that evening as we arrived back at the flat after dinner, she motioned to us to join her and a neighbor in her living/dining room.  The room consisted of a large table with bench seating and a television. There really wasn't room for anything else.  She motioned for us all to sit, and she whisked out an old 2-liter-sized soda bottle filled with a peach-colored liquid.  This was no store-bought soda.  Andre posed the obvious question to her.  "Baba says it's her homemade wine, and she wants to share it with us."

To start with, this stuff looked just like Mango Grove Boone's Farm (I'm not going to get into how I know that there is such a flavor as Mango Grove by Boone's Farm - just take my word for it).  And my experiences with homemade wine haven't been terribly positive. Many of my previous homemade wine tastings would be described as "overly-sugared essence of vinegar with a hint of fruit that should have been tossed a week ago."  So the sight of Baba walking in with a sketchy bottle of liquid did not exactly produce the big smile on me that it did on her.  But we were in her home, she wanted to share, so it was my job to suck it up for the sake of positive cultural ties between Bulgaria and the US.  Or something like that.

The wine met my low expectations with flying colors.  But Baba made it, and so I would drink it.  Baba drank, too.  In fact, after just one glass, she was lit.  She babbled in Russian with a huge grin on her face.  Then she started to sing.  And to our great surprise, Andre started to sing with her!  She was singing Russian songs that she knew since childhood, and Andre (whose father was Russian, if I remember correctly) just happened to know them, too.  The wine suddenly seemed much tastier.


Baba started telling us about her life.  She told us of her late husband and how he proposed to her at a beautiful beach just a few kilometers north of town.  There was a glow in her face that I knew wasn't just from the wine.  She stood up from the table and beckoned us to follow her.  She wandered into the bedroom that Christina and I were sharing and pointed to an old black and white photograph over the bed - it was a picture of her and her husband sitting on the rocks at that very beach.  I couldn't believe that I'd already spent 2 nights in this room and never paid any attention to this picture.  It was beautiful - both Baba and her husband were all smiles, looking at each other as they lounged on the rocks in the beach breeze. 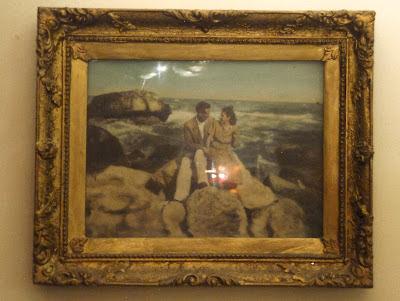 We visited that very beach the next day.  How could we not?  This ordinary, diminutive old woman had allowed us to share her home, her wine, and her life story.  Deliberately seeking out that beach was simply another way to thank her for her kindness and generosity and to show that we appreciated what she shared with us.  I don't know if Baba is still alive and kicking and renting out rooms in her flat, but if she is, I hope she is still sharing her wine and singing to her guests.  And I hope her guests appreciate it.