After our guinea pig experience in Sofia, Bulgaria,Christina and I briefly parted ways with our new German and English friends. They consisted of Andre and Gustav, the Germans we picked up on our flight to Sofia, and Tom, the Brit that we adopted in our hostel in Sofia.   Christina and I made plans to meet back up with Andre and Gustav in Varna, a resort town on the Black Sea.

Christina and I arrived in Varna first.  Our first stop was an accommodation agency to find a place for the four of us to stay.  Despite our complete lack of Bulgarian and the clerk's complete lack of English, we managed to secure 2 bedrooms in a local woman's flat.  We were so proud of our amazing traveling skills.

After a couple of wrong turns and general confusion, we found the building that was to be our home for the next few days.  Our hostess, a smiling older lady who also spoke no English, had a perfectly lovely flat. It was not fancy in any sense, but it was furnished and clean.  We engaged her in a game of charades to try to explain that we were going to the train station to meet up with the boys.  I don't think it worked.

Back at the train station, we saw Andre and Gustav pop through the crowds... with Tom.  Christina and I exchanged looks.  We had no idea Tom was coming to Varna, too.  But there was nothing to be done except go back to the flat and see what we could figure out.  Given that Christina and I couldn't even effectively communicate something simple like "We'll be right back", how were we going to get across, "Oops, we're actually 5 instead of 4.  That's cool, right?"

I admit, I was pretty nervous as we climbed the steps back up to the poor lady's flat.  I certainly didn't want to make her angry.  I never want to be the tourist that gives an entire nationality a bad reputation.  I also didn't want to spend the rest of the day running around the city trying to find another place to stay. I'm not very good at charades.

The five of us walked in, and the little old lady came out to greet us.  Languages immediately started flying around the hallway.  Bulgarian, German, English, Russian.  Russian!  It took us a moment to realize that Andre and our hostess were speaking Russian to each other.  It sounded... angry.  Great.  We were going to get kicked out and leave this poor woman cursing every English-speaking tourist in Bulgaria.  Look at us, Cultural Ambassadors of the Year.

And then they burst out laughing. Andre turned to us and said, "It's perfectly fine for all five of us to stay here.  We can just pay her directly for a fifth person and not tell the accommodation agency. And she wants us to call her Babushka."

Without Andre, we would have probably caused a scene and ended back out on the street.  Instead, we kept our lodging and gained a Bulgarian grandmother. 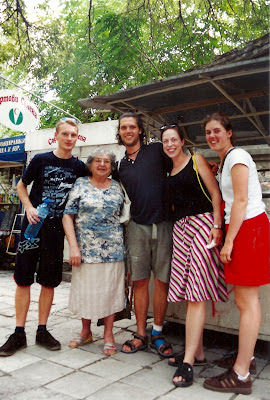