What do you do when it’s a balmy winter Monday and you’re unemployed?  You take a day trip to Gettysburg, PA.  That’s what.

Chris has been to Gettysburg many, many times.  I’ve lived in the mid-Atlantic for over 10 years now, and I’d never been.  It’s a whopping 90 minutes from DC.  I know, I should hang my head in shame.

If you need a history refresher (and I will sheepishly admit that I needed a bit of one - thank goodness Chris is a walking American history textbook and makes history MUCH more interesting than any book I studied in school), here you go - the Confederacy was basically owning the Union in the war until this battle, which started on July 1, 1863 and lasted 3 gory, bloody days.  It was the deadliest battle of the entire war, with about 50,000 human casualties and 5,000 dead horses spread over about 25 square miles.  The poor little town of 2,400 civilians was left with a nasty clean-up job.  Apparently it took a few years for the rank stench of death to finally go away.  Everyone together now, “Ewwwww.”

The town Gettysburg is beautiful and quaint, with many restored Civil War-era buildings still hanging around, and today it doesn’t reek of death.  The building below, now housing a tavern, was taken over by the Confederate solders who used the tiny side window at the top to pick off Union soldiers in the street.  Of course, the Union shot back at them, but the window was a pretty small target, and muskets aren’t known for making terribly accurate shots.  So the side of the house got all kinds of shot up, and the bullet holes are still there. 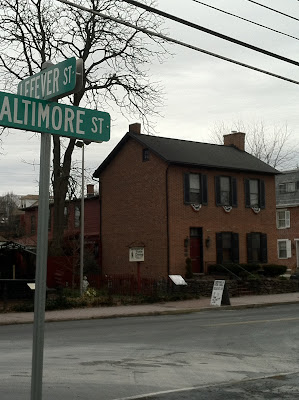 The Gettysburg Visitors Center offers a map detailing a self-guided auto tour, which was right up our alley, so off we went to drive around the battlefield. Just so you know, this tour was surprisingly well marked with road signs.  Shoot, you could probably make the whole drive without the map if you know where to start.

We went a bit out of order.  But hey, it’s our tour.  We can do what we want. So our first stop was the Solders’ National Cemetery.  We stood on the spot where Abraham Lincoln gave the infamous Gettysburg Address after the war.  We realized just how many unknown soldiers were buried - both individually and in mass graves.  We froze our asses off because the day’s temperature peaked at like 10am. And I had chosen not to wear socks. 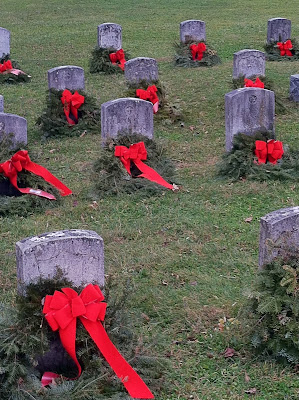 We continued driving through the battlefield, going to the area where fighting first broke out on July 1, 1863. Memorials to various regiments, states, and military officers are everywhere - everywhere.  It could easily take days to check them all out. I kept trying to picture the beautiful rolling fields littered with mangled humans and horses.  That was no easy feat.  Then again, I’m pretty dadgum sure that fighting a war in the middle of summer in the 19th century was no piece of cake, either.  I’ll stick with my first world problems. 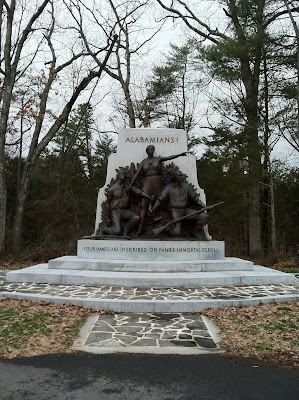 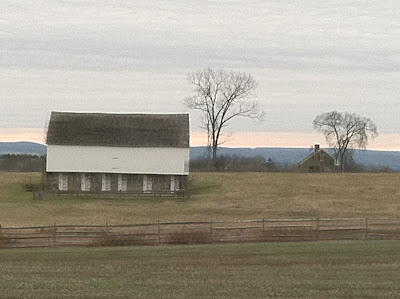 Darkness set in at our last stop, which is also supposed to be one of the most haunted spots of the entire battlefield.  An area called Devil’s Den happened to be the home to a large number of Confederate casualties.  It’s in a rocky valley, and the Union soldiers on the 2 neighboring hilltops had no problem taking down thousands of men down below.

After the battle was over, a photographer came through the area.  He wanted an action shot of the battle, but he was a little late to the game.  So he got the bright idea to pose a corpse in Devil’s Den with a gun to fake an action shot.  The poor soul was apparently not amused with the fact that his former body was being manhandled, and he supposedly now haunts photographers that take pictures of Devil’s Den.  There are numerous reports of pictures turning out distorted, of cameras randomly turning on and off, and of cell phones with cameras suddenly being drained of all their battery power.

So what did Chris and I do?  We ran around the rocky den taking pictures.  Duh.

My iPhone didn’t exhibit any strange behavior, and I didn’t see anything funky in any of the photos.  Pooh. What a letdown.

We ended up only spending about 6 hours in Gettysburg, which isn’t nearly enough for nerds like us.  A trip back in the spring is definitely in order.  And next time, I’m going to bring a real camera, try to piss off the Devil’s Den ghost, and get some freaky pictures. I’ll let you know how that goes.

And if you’re a history nerd, too, and want more info on the battle and Gettysburg itself, check these out: