The abuse of my butt

My final day in Pucon consisted of perfect sunny weather, some gusty winds, and horseback riding through the mountainous countryside for a few glorious hours.

I booked a half-day ride with Campo Antilco, about 20 minutes outside Pucon proper.  Like my mountaineering experience, I was a horseback riding virgin.  I think I rode a pony at a fair when I was 5 years old, but that is the extent of my experience on a horse.

I did ride a camel in the Namib desert outside Swakopmund, Namibia in 2010, and while that was a great experience, my butt and the camel saddle did not get along very well.  The 20-hour flight back home a couple of days later was not a comfortable one. I saddled up at Antilco hoping that the horse saddle would be kinder and gentler to my bum than the stupid camel saddle was.

Gabrielle, our lead guide, took our small group (which consisted of a young Welsh couple and myself) through some gorgeous scenery.  We rode through woods and by rushing rivers, crossed rocky creeks with mountains all around, strolled through Mapuche settlements, and took a break underneath some trees with sheep and lambs grazing nearby.  I felt like I´d been transplanted into a children´s book.  Only, I am entirely too inappropriate in general to be part of any children´s book. 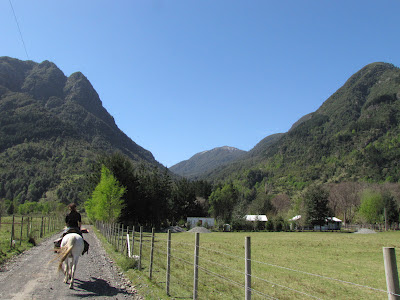 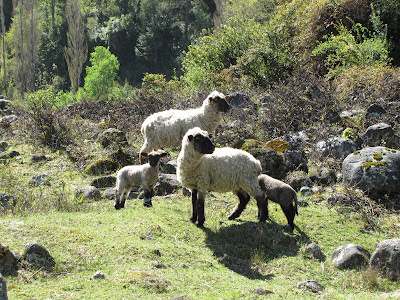 Before our ride began, we received instruction on how to guide and stop our horses with the reins and how to make them go faster (kick them - it sounds mean, and it kind of felt mean, too, although Gabrielle assured us it wasn´t).  None of this mattered, because my horse did whatever the hell she wanted.  When we fell behind and I wanted to catch up to the guide, I gradually kicked harder and harder.

Me: *kicking wildly* "Come on, Esperanza, catch up!"
Esperanza:  "Whatever, bitch.  You are not the boss of me."

We reached a long, open sandy area overlooking the cold, rushing river below.  Gabrielle turned around with a huge smile on her face and said, "Would you all like to try a gallop?" Before any of us could give a definitive answer, she took off on her white horse.  With no prompting whatsoever, our horses followed suit. Esperanza galloped toward the dropoff to the river for about 5 seconds, then she started kicking wildly.  I freaked out and shrieked like a little girl.  I saw my future.  I was going to get thrown off, yanking my knee out of whack in the process because I can´t navigate stirrups any better than I can navigate an entire horse, and go plunging into the rocky, freezing river 6 feet below.

Ok, so that didn´t happen.  But I swear, it was going to.  Esperanza stopped kicking.  I firmly announced that I was DONE galloping for the day.  I told Esperanza that she could do whatever the hell she wanted as long as I stayed on until we got back to the farm.  I guess she took me up on that deal, because that´s exactly what happened.

I had a wonderful time riding through the countryside, and I didn´t end up in the hospital with a blown-out knee, so I consider the day a success.  Antilco runs a great operation - the farm is beautiful, the horses are very well cared for, the guides are fantastic, and they even have adorable dogs and a kitten running around. 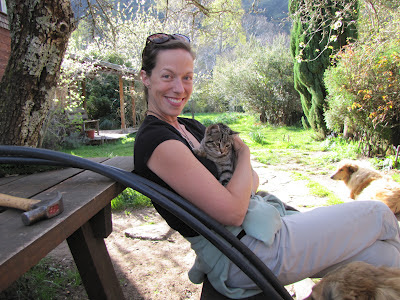 And a couple of hours later, I realized that my bum didn´t get along with the horse saddle, either.  It hurt.  I think this is the last time I mount an animal with a saddle strapped to it.
Posted by Carla at 9:30 AM