One of the pleasures of travel is the discovery of new foods, styles of cooking, drinks, and even entire cuisines.  I will often order something off a menu without knowing what it is just to see what gets placed in front of me, or order something unrecognizable from a market in hopes of discovering something new and delicious.  If it works, I get delicious food and possibly expand my culinary horizons.  If it doesn't work, I may go hungry, but I'll usually get a decent story out of it.

I had a particularly high rate of failure in my mystery food quest while in Vietnam.  The crowning event though, took place in the Danang airport.  I sauntered up to a snack counter in search of something to drink.  Of course the counter had water, along with Coke, Coke Light, and other soft drinks that seemed just entirely too familiar.   I was rather thirsty, and I really should have just gotten a garden-variety bottle of water.  But I was in the mood to branch out.  Water, Coke, and Fanta were not going to cut it.  I spied a green can that I'd seen all over the country.  I couldn't even see what the name of this mystery green drink was.  Perfect.  I plunked down the equivalent of 50 cents and the mystery drink was mine.

I gave the can a once-over before popping it open.  It was called winter melon tea, and there was a picture of an unidentifiable fruit or vegetable product that looked like a severely bloated cucumber.  Hey, I like tea and melons.  I cracked it open with great expectations and took a sip. 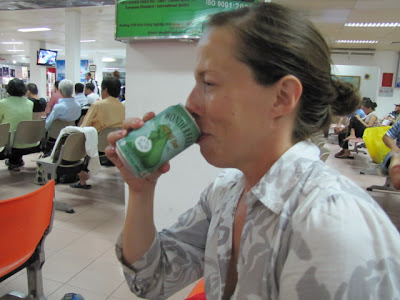 And just in case that doesn't fully get the point across... 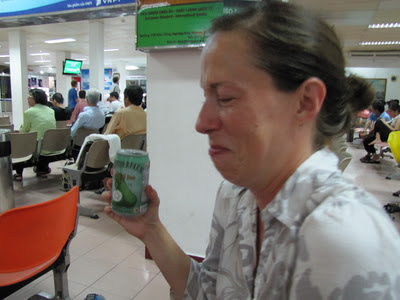 Vile, VILE substance.  This is what I imagine sweetened cat pee would taste like.  But no, sweetened cat pee flavor isn't where the deranged creator of this liquid stopped.  He/she decided that this drink wasn't complete without...  jelly balls.  Sweetened cat pee with gelatinous balls floating around.  That, folks, is winter melon tea.  This is the stuff of nightmares and torture chambers.  It is a cardinal sin against humanity.  I hope that the creator of this "drink" is sitting in a heavily guarded room somewhere sporting a straight jacket.

There must be something to this substance, though, because it's sold all over Vietnam.  Someone out there is drinking it.  I'm not sure if my taste buds will ever forgive me for what I did to them, but I shouldn't judge (too much, at least) - after all, there are those out there that simply cannot fathom the appeal of grits.  I love grits.  So, to each their own.  Pass the grits, and keep the winter melon tea far, far away from me.
Posted by Carla at 11:09 PM