If Issac Newton was alive today, he would declare this his fourth Law of Motion:  If you are non-Asian and walking down the street in either Phnom Penh or Siem Reap in Cambodia, you will, per the laws of physics, be offered a tuk-tuk ride every 120 seconds. Unless the monsoon rains are raging.  Dan and I proved this to be true through numerous non-scientific and uncontrolled experiments in both cities including multiple walking trips to the American Embassy (because one of us had to bribe our way into the country... oops), searching for eating establishments that apparently no longer exist, and generally getting lost.

With this epic new law firmly established, I would like to present an additional theory on Cambodian tuk-tuks:  A tuk-tuk will attract more business if it is painted with an utterly oxymoronic theme.  I present my evidence below: 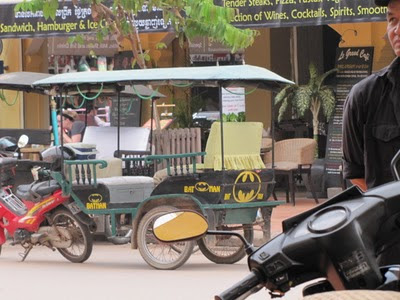 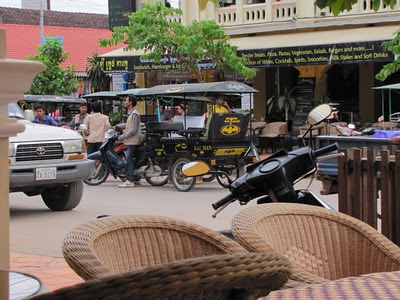 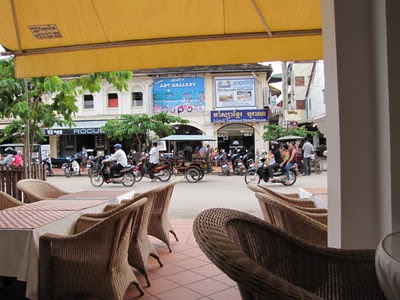 Oh my Buddha, it's a THIRD Bat-tuk-tuk.  It's a little hard to see, but believe me, it's there. WTF. 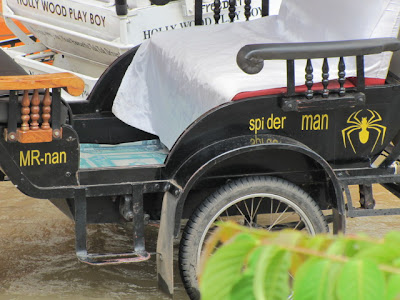 There is way too much Batman up in this town.  So it's Spider Man tuk-tuk to the rescue! Way to buck the trend, MR-nan.  I didn't take the opportunity to ride in Spider Man, but if there had been a Spider Pig tuk-tuk, I would have hired it for the day just to ride around town singing the Spider Pig song. 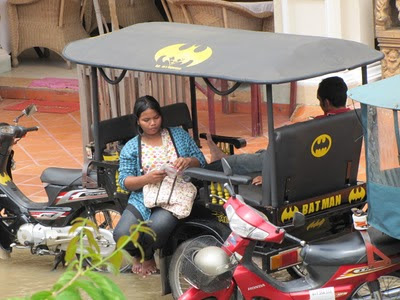 A fourth Bat-tuk-tuk?  Seriously?  I want someone to dress up as the Joker and walk around town just to see if they get tackled by a bunch of tuk-tuk drivers (hey, Dan...?) 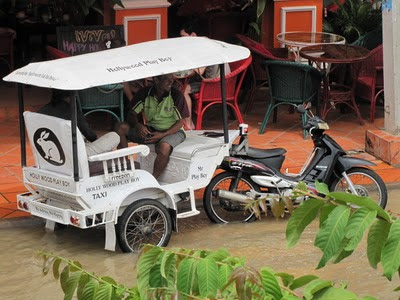 Apparently not everyone needs to claim superpowers around here to be awesome.  Let's take a closer look at this one... 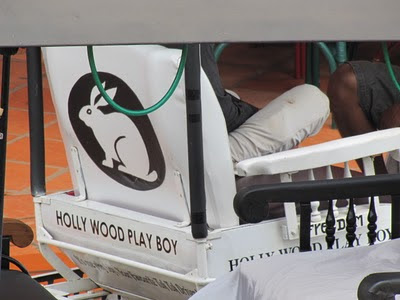 I can't decide which takes the cake - the bunny that looks scared out of its gourd, or the absolutely random "FREEDOM" sign underneath the armrest.  Or the fact that it's simply the wrong bunny. 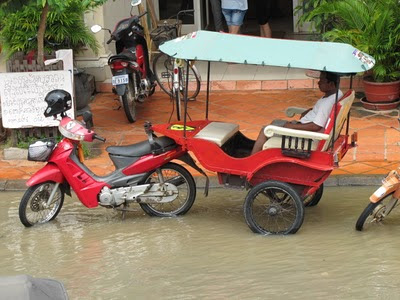 And finally... a Ferrari tuk-tuk!  I want to see this guy go from 0 to 60 mph in 4.2 seconds.
Unfortunately, I was not in Cambodia long enough to conduct a sufficient number of observations on ride frequencies in themed tuk-tuks versus non-themed tuk-tuks to either confirm or deny my theory.  However, if you know of a scientific organization or company that is in need of such data, my data-collection services are available for hire.
Posted by Carla at 10:50 PM