A day in NYC with no plan

I must say, I think Chris and I did fairly well on our whirlwind NYC day for not having a single thing planned until we were somewhere in New Jersey.  We have a friend and neighbor that happened to be in town at the exact same time, and we happened to arrive at lunchtime, so it was perfectly natural to meet up for lunch.

We walked from the bus dropoff to Hell's Kitchen, and on the way we just happened to run smack into the NYPD academy graduation ceremony letting out at Madison Square Gardens.  We were suddenly surrounded by 1,100 wide-eyed graduates and their very proud families.  I was very happy for them, but I was getting pretty hangry.

We met our friend at Room Service, a funky Thai restaurant with an awesome deal of a lunch menu and sort of skuzzy Blue Moon on draft.

The next spontaneous decision was to walk the High Line in Chelsea.  The High Line is a rails-to-trails type project that converted an old elevated rail line into a trail with funky artistic establishments.  My inner art geek loved it. 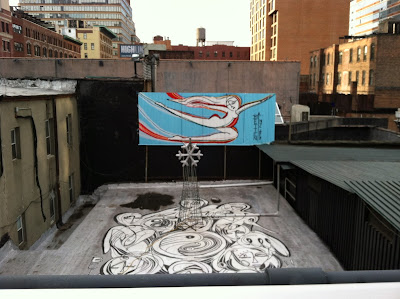 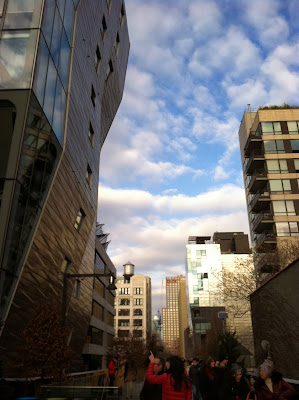 The only problem with the High Line?  It's outside, and it was dadgum cold.  We got back onto the street and searched for a place to warm up.  That place would be a bar, of course.  We wound up at Westside Tavern and immediately loved it.  If I lived in Chelsea, this place would be my second home.  It was obvious that this was a beloved neighborhood bar.  We liked it even better after I got a delicious hot toddy and Chris got a non-skuzzy Blue Moon.

Once I regained feeling in my hands, I proposed getting tickets to an improv show at the Upright Citizens Brigade for that evening.  Chris was game, so using the power of the mighty iPhone, I reserved tickets while polishing off my hot toddy and another beer.  Tickets to the show were only $10, and we were drinking during happy hour.  Not only were we doing everything on the fly, but we were doing it on the cheap.

After an early dinner stop at a hole-in-the-wall Mexican joint called Salsa Y Salsa, we went in search of the Rockefeller Center Christmas Tree.

The Christmas tree is just as gorgeous and gargantuan as it looks on television.  I would pay to see them transport that thing and get it into place.  It's even stabilized with wires connecting it to the nearby buildings.

The main problem with going to see this tree is that it can easily necessitate going through Times Square to get there.  Times Square is an explosion of neon lights, tourons, and Elmo. But opinions can differ as to whether this is good or bad. Case and point:

Chris:  "This is awesome!"
Me:  "This is where humanity comes to die."

Between the Mexican place and Rockefeller Center, we saw approximately 6 Elmos, 7 Mickey and Minnie Mouses, 2 Hello Kittys (Kitties?), and 2 Statues of Liberty on stilts and wearing these glasses.  All the costumes looked like they were made in China in a factory that only hires blind employees.  Hello Kitty looked like she'd had some bad plastic surgery.

As we leisurely made our way to the Upright Citizens Brigade, a woman frantically stopped us on the street right at the base of the Empire State Building.

"Excuse me!?  Where is the Empire State Building!?"
"You're looking at it."

Her gaze traveled up the length of the building.

"Oh... thank you!"  And with that, she rushed to the door.  I hate it when I have an Empire State Building emergency.

After a pit stop at another bar, we found ourselves in the dingy basement that is the Upright Citizens Brigade.  The cast of 5 performers interviewed an audience member to get material for their skits.  A man named Hannah (that's right, a man named Hannah) was very eager to be the chosen one.  After claiming to be a flight attendant for the "best airline in the world today" (Emirates), admitting his entire family worked in a shady-sounding real estate business in Jersey, and suddenly stripping off 2 layers of clothing, the cast went to work.  I gave it two thumbs up, though only a couple of the cast members really stood out.  They made up material for well over an hour based on Hannah's shady-sounding life. I considered it $10 well spent.

That was the end of our 12-hr marathon in NYC, but getting back home was more of an adventure than we had hoped for.  If you've ever been curious about some of the major bus lines that don't begin with "Grey" or end in "hound", well, I'll have a report on Megabus coming up for you soon.