I am an idiot. Sometimes.

This week has not gone exactly as planned.  I returned to DC from Alabama on Wednesday.  I had the Maryland Tough Mudder race planned for Sunday, and a week after returning from Alabama, a flight to Chile for 3 weeks.

Except...  I was supposed to run Tough Mudder on Saturday, apparently.  Oops.  And I didn’t discover this discrepancy until Friday.  Calendar FAIL.  Saturday wasn’t going to work.  I had actually spent weeks doing the Tough Mudder Boot Camp workout because I was scared sh*tless by this race.  On top of that, I had also bought my boyfriend a spectator ticket to the event.  For Sunday.

And we did.  And it was good.  It was better than good.  Chris and I got in the car with absolutely no plan whatsoever.  We were on I-66 West before he said, “Where would you like to go?”  Well, the only places I’d been in West Virginia were the George Washington Forest, Canaan Valley ski resort, and the New River Gorge for Bridge Day.

And so we ended up at a football game in his hometown (where he’s a freakin’ celebrity) and embarking on a pub crawl to 3 of the 4 bars in said hometown.  Then there was the 12 hours at his fraternity house where I learned drinking games that I never knew existed and thought I was going to lose him to a hot 19 year-old brother named Mark (hey, Mark was a super stud - I can’t blame him).  I also semi-rocked a couple of those new drinking games, I’m happy to report.  And then we stopped by Dolly Sods, the highest mountain in West Virginia before coming back to DC for a late night of tacos and chardonnay.  Ok, I’m the only one that had chardonnay.  It went well with the tacos.  Don’t judge. 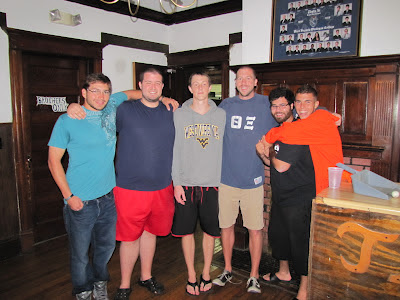 I kept getting emails throughout the weekend about the screwed up parking situation at Tough Mudder, the nasty weather, and the eventual cancellation of the event as a whole.  I was incredibly happy to be hours away in the Mountain State, downing delicious diner burgers and cheap beer.  I could have rocked Tough Mudder, but it wasn’t necessary. I might do it some other time, but the impromptu trip to West Virginia was far and away worth the “sacrifice”.

I’m still going to Chile tomorrow.  I haven’t packed a damn thing.  And I don’t care, because going to West Virginia on a whim was totally worth it.  Tough Mudder will still be there next year if I want it.  So will West Virginia.  We’ll see what I chose...

Until then, raise your glass for good flight karma, some carmenere wine, and some pisco sours.  Salud!
Posted by Carla at 6:40 PM