I'll get sick for this

I went to Egypt about 6 weeks before the revolution began in January 2011, and I read all the health warnings that are pretty universal for any developing country - don’t drink the water, don’t touch ice cubes with a 10-foot pole, don’t eat any raw fruits or vegetables, etc.  But despite following all these health guidelines, it is still very easy to fall ill, and that is exactly what I did in Egypt. 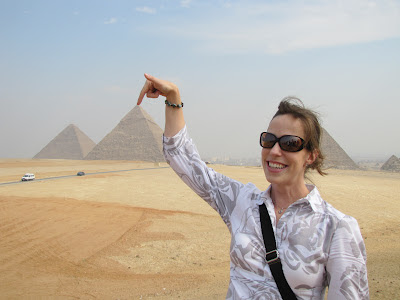 After 9 full days of running around the country, my traveling companions and I had just one day left in Cairo with our expat friends that live there.  We had grand plans to eat a nice lunch, to go the Khan el-Khalili bazaar, and perhaps hit up another museum.

I was feeling rather odd after breakfast, and soon my stomach rejected the notion of food completely.  But I was not about to let that stop me.  I rallied after a bit of a rest, and we went out in search of lunch before meeting up with Seth who was going to cab with us to the bazaar.

Once outside, I realized that my energy was simply gone.  Walking at a snail’s pace was all I could muster.  At lunch, my stomach gave me ample warning that food was not a welcome guest.  I took a piece of bread and stuck it in my purse with hopes that my stomach might embrace it later.  We got on the subway to meet Seth in Tahrir Square.  About halfway there, I nearly passed out.  Steve and Lynette shoved me out of the train at the next stop, where I just sat on the platform and attracted more than the usual amount of stares from the locals.

I regained enough strength to board the next train.  When we reached our stop, It took me a whole 5 minutes to walk up the stairs where Seth was waiting for us.  But I was determined to make it to the Khan.  Well, I was until Seth pulled me aside and said, “It’s easy to get you into the Khan.  But if something happens to you while we’re there, it is not going to be easy to get you back out.”

&*$%.  I gave in.  Seth, Steve, and Lynette hopped in a cab, and I teetered my way back down the stairs to take the train back to the apartment.  Just two stops from my destination, I nearly passed out again.

I finally made it after getting lost on the walk back, which again, was slow and laborious.  I stayed mostly in bed the rest of the day.  I was scheduled to fly back home late that night.  When it was time to go to the airport, I couldn’t even carry my own backpack down the stairs to the hired car.  How was I going to navigate the chaos of the Cairo airport like this?

Well, somehow I made it to the plane.  The 13 hour flight to JFK was beyond miserable - we hit pockets of turbulence every 15 minutes like clockwork, and the Egyptian man next to me simply couldn’t get over the fact that I didn’t have children and didn’t smoke.

I was sick for over a week after I made it home.  I actually lost weight over Thanksgiving.  My mother was worried sick and thought that going to Egypt was the worst idea I’d ever had.  But I totally disagree.  As miserable as I was, I would go through it all over again to have the experience that I had on that trip.  In a traveling lifestyle, getting bizarrely sick is inevitable.  There are some precautions that can and should be taken, but they only do so much.  I think it’s worth putting up with to experience other parts of the world, so I’ll continue to travel, and I’ll continue to get sick.  I’ll just pack some extra meds and be as prepared as possible.

Pass the Pepto, please.
Posted by Carla at 1:30 PM