Dan and I felt incredibly lucky to have the chance to check out the mountains around Sapa on foot.  Pictures simply can't convey how vast and brilliant this area of the world is.  But more than once, we were reminded that Mother Nature rules here.  First, the trail itself nearly whipped us in a few spots.  This is not your mama's walk in the park - we slipped and tripped all over the place.  Were it not for the Black H'mong women (in their dadgum flip flops, no less) to give us a helping hand - literally - in a number of spots, we would have fallen on our faces multiple times.  If that wasn't enough to make us realize our place in The Great Order of Things, the powers that be decided to send a chicken.  That's right, a chicken.  As Dan was walking across a small log placed over a very muddy and mucky part of the trail, a chicken came blasting out of the brush and with a single "SQUAWK!", body-slammed himself into Dan, knocked him square into the ankle-deep mud, and fled into the neighboring field.  "%&^#ing chicken!!"  The Black H'mong women nearly fell over with laughter.  Hell, Kong and I were right there with them.  Dan wasn't exactly laughing, but he swore revenge and has been eating chicken dishes ever since that day.
﻿ ﻿
We arrived at our homestay mid-afternoon.  The hill tribe family that we were staying with had a house right on a beautiful rushing river with a large waterfall just steps away.  It was a gorgeous setting!  Dan and I sat by the river to wash the mud off our lower extremities and had to fend off a Black H'Mong and a Red Dzao woman who were ridiculously aggressive (but in a very meek and polite way, ironically) in trying to sell us things.  "You buy from me, cheap cheap!"  "You no buy from me today, maybe you buy from me tomorrow?"
After Dan and I managed to remove a little mud from ourselves, Kong proceeded to introduce us to our host, Mr. Long and his wife, and then took us outside to enjoy some Tiger beer and teach us a card game called Guatemalan &*^$%screw (or something like that).  Mr. Long's brother-in-law joined us for the game, and we played until dinner was ready.  By this time, a couple from Spain and their Black H'Mong guide had joined us as well.  They were also spending the night in the home.
Dan and I were amazed to see the spread of food that Mr. and Mrs. Long put out!  Two tables were covered with food - rice, spring rolls, pork and chilies, buffallo and peppers, choko, a chicken dish (go Dan, go!), and more. 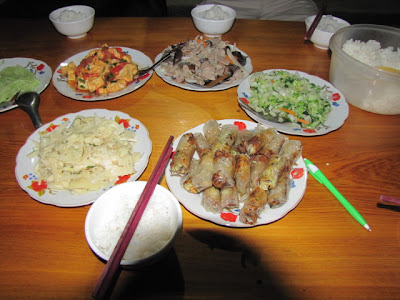 And then water bottles and shot glasses came out.  Um... what?  "Happy water!!" yelled the Spanish couple's guide.  "You no drink, you no go inside!!" And she proceeded to pour the clear "happy water" from an Aquafina water bottle into everyone's glass.  Uh oh... Kong said "Now we sing Vietnamese national anthem," and turning to me he said, "and then you sing American national anthem."  Me?  Wait a minute...  Dan!  Dan had a sheepish smile on his face.  "You told them I sing, didn't you?"  His smile just got bigger.  "I hate you."
Kong, the Black H'Mong woman, Mr. and Mrs. Long, and the brother-in-law all broke out into the Vietnamese national anthem.  Wow.  Here we were in the middle of nowhere in Vietnam sitting with a hill tribe family in their house eating their homecooked food and listening to them sing their national anthem.  This was fantastic.  "Ok, your turn!" Kong said.  Crap.  I stood up and sang The Star Spangled Banner.  Next thing I knew, the Black H'Mong woman was walking over to me with a crown and a heart on a stick made of some plant as a "thank you" for singing.  Well, how sweet!  So of course, I put them both on my head.
Kong and company taught us a toast in Vietnamese that involved a lot of yelling.  So throughout the meal, happy water was poured, the toast was shouted, and down went the happy water (which was actually rice wine).   There was entirely too much happy water.  Thankfully, the bottle was almost empty.  Or so we thought - Dan suddenly leaned over to me and said, "Oh no... Mr. Long has a 1.5 liter bottle of happy water under the table that he's pouring from."  Oh my Buddha.
And that's when I realized what we were doing - we were sitting around with a bunch of Vietnamese hillbillies drinking Vietnamese moonshine.  We continued to eat, yell, and shoot happy water into the night.  The next day I decided that the happy water was actually evil water, but not too evil.  So what if Dan and I got shown up by a chicken and some hillbillies?  This place was great!
Posted by Carla at 10:54 PM