This past weekend, Sarah and I joined a group from the US Embassy (including our fabulous hosts, Angie and Sandip) on a trip to central India to check out groups of caves that have been cut out of mountains at Ajanta and Ellora.  We flew from Delhi to Aurangabad super early on Saturday morning (the domestic flight experience itself will be the subject of a future blog post).  Our hotel, Lemon Tree Hotel, send about a dozen cars to pick up all nine of us.  Various people in the group had made separate reservations, so they sent a car for each reservation.  One woman had called ahead to try to consolidate our group into just two vehicles, but that only resulted in them sending 2 vehicles for her alone.

After a quick breakfast in the hotel, we loaded into hotel-driven vehicles (only 2 of them this time!) to Ellora, about 30 km away.  The parking lot of Ellora itself was a complete jungle of Indian tourists, hawkers ("Hello hello, you like elephant trinket?  Need guide?  Hello hello!"), rickshaws, taxis, and motorbikes.  But right in front of us was the granddaddy of all the caves - Cave 16, or Kailasanatha.  Check this ancient bad boy out: 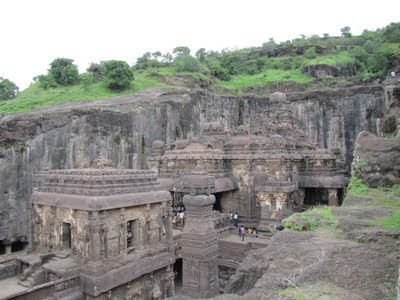 Pictures can't do this thing justice.  Or any of the caves, really.  This thing was multiple stories tall.  It's a Buddhist cave dating back to about 700 AD.  I had to keep reminding myself that this wasn't built, but carved out of a big fat mountain.
Some of the caves at Ellora were Buddhist temples or monasteries, others were Hindu, and a few were Jain (quite frankly, the Jain ones paled in comparison to the Buddhist and Hindu ones).  It's an amazing place, well worth anyone's time.  But both Ellora and Ajanta are off the beaten foreign tourist path, so it was almost entirely Indian tourists - and us.  Which brings me to my next subject:  Indian men.

Thus far, I have only learned one word in Hindi, and I highly suggest that any other western woman visiting India do the same:  "nahi", pronounced "neh".  It means "no".  Westerners are something of a rarity here in India, especially in off-the-beaten-track places like Ellora and Ajanta.  And western women for the most part bear the brunt of the reaction.  People stared at our group everywhere we walked.  Both men and women stared, but the men stared much more than the women.  Men followed us from cave to cave.  Yay, stalkers.  But the worst part was the pictures.  Now, if a woman wants her picture taken with me, that's sweet.  If a couple wants their child to have their picture with me, that's cute.  When a group of 18 year-old dudes want their picture taken with me, that's sketchy.  To an Indian guy, a picture of a western woman is the equivalent of an American guy having a Playboy mag stashed under his mattress.  The tarts in Playboy choose to be that for the men that want it.  I don't want to play the same role for some 19 year old Indian punk.  Turning down the requests for pictures was easy - stopping the men from taking the pictures without asking was a completely different cricket game.  Instead of asking me to pose with them, they just aimed their cell phone camera, pointed, and shot.  So we all had to be on our toes and catch them before they did it.  If I saw a cell phone go up, I would walk toward them, glare, shake my finger and yell "Nahi, nahi, nahi!!" They usually put the phone down and walked away with an "Aw, bummer" look on their faces.  I feel like I spent as much time keeping an eye out for covert photographers and keeping a close watch on the groups of boys that followed us from cave to cave as exploring the caves themselves.  But that's ok - the caves were worth it!  And as for the men, well, they are an experience.

Oh, and there is Ajanta!  After a full day at Ellora on Saturday, we spend Sunday driving to/from and exploring Ajanta.  The caves at Ajanta are all Buddhist.  And while not as individually impressive as Ellora, the setting of these caves was just magical.  Again, I wasn't able to take a picture to do it justice.  But I tried  ;-) 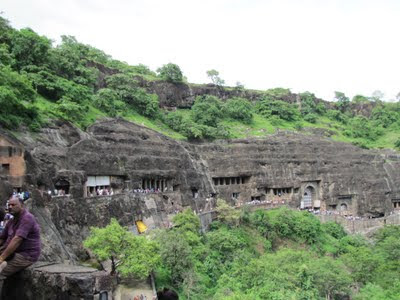